WHAT TO DO IN SAN BENEDETTO DEL TRONTO

Core of the corso is its famous Rotonda, that is at the crossroad between the end of Boulevard Secondo Moretti and the starting point of the promenade, at the North. The typical fountain at the center of the square, has became one of the emblem and of the most known images of the city. The "Museum of the Sea", located at the Fish Market at the North Dock of the city harbor and it is a Museum devoted to the Adriatic Sea.

One can spend the evenings on the Adriatic Riviera by watching a movie at the cinema on the second row in Porto D'Ascoli or by drinking a cocktail in one of the 110 bathing resorts on the promenade, where one can have fun till dawn.

On the beach it is possible to tan at the agreeded-upon chalet or do some water sport such as flyboard, wakeboard, pull inflatables, water crafts... we well book for you! If you want instead to spend a day far from the beach we will suggest you some daily tours to Offida, Water Game Parks, Rome...

Close to the Hotel Maestrale there is the Sentina Natural Park: at the north of the Tronto river, it is a 200 hectares area where there are only few buildings; it is a really important park due to its organic and ornithological fauna.

This is one of the rarest sandy stretches of beach that is not built along all the Adriatic. It is rich in plants and animals that are at risk of extinction or are even more rare to be found in Italy, and its importance is every day growing.

San Benedetto is the right place for who loves sport: it offers a lot of sport chances, the stadium, tennis fields, skating lanes, a palasport, bocce fields, swimming pools, athletic field, a tourist harbor and a nautical club.

To be not forgotten the hill hinterland with really important Medieval villages and wine-producing business (DOC wines production; Falerio and Rosso Piceno among the others) that offer a lot of chances to do excursions in few kilometers.

San Benedetto is the birth place of the "brodetto alla Sambenedettese", a fish soup with green tomato, peppers and vinegar. 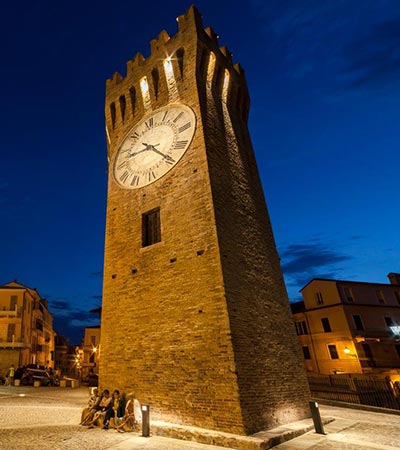 Contact us now to have more info about our last rates, special offers and promotions. Tel: (+39) 337 642403 E-mail: info@maestralehotel.it Contact us now!

”Very good and pleasant hotel with very nice personal. And the food there was amazing!!!! Accomodation was also good. TV, wifi and big terrasa with wonderful view on the sea...

”All fantastic, food so amazing, Rosalba our waitress so kindly. Accomodation was Also, good, tv, Wi-Fi, bike free. The beach is about two minute near the hotel...

Sign in to our newsletter to always be updated about our last special offers, reductions and promotions!